Reflections on my father and cancer

Considerations for Carcinogenic Substances in the Body

In May 1996, at the age of 75, my father became a victim of pancreatic cancer. He was a World War II U.S. Army combat veteran. In 1945, while fighting in the Philippines, he was seriously injured from an explosion that riddled his body with shrapnel. He spent over a year in rehabilitation and was discharged from the Army afterwards.

In his civilian life, he was self-employed as a commercial roofing contractor since the 1960’s and also involved with electric vehicle repair, so he was in regular contact with various industrial and automotive chemicals.

Moreover, for many years one of his shops was located near a dry cleaners, a place that spewed condensation into the air that felt like sprinkling rain as it settled to the ground. If you’ve done any research into the causes of cancer, you could say that he was exposed to many environmental toxins that could be carcinogenic, or cancer-causing.

He was hard-working, fitness conscious, socially active, community oriented, did not smoke, drank very little alcohol and an avid runner since the 1970’s.

His sudden illness and death came as a shock to the people who knew him.

It is unfortunate that the general public’s understanding of nutrition through virtually all of my father’s professional life was pretty misinformed compared to the growing awareness now of what constitutes a healthy diet. It has been kind of a whiplash effect from the days of when processed food was considered the solution to all dietary needs.

Having been regularly exposed to toxins, it would have been a good idea for a person like my dad to have a diet high in vitamin C foods, cruciferous vegetables and other natural anti-oxidant foods. These would have been a good toxic counter-measure, in addition to a diet with Omega-3’s and a minimum of processed  and synthetic foods. Supplementation with high quality vitamins and mineral products would be highly recommended given uncertainties in the nutrition quality of the typical available food supply (refer to my older  blog article ).

Although I was not inspired to pursue a career in medicine until about 6 years after my father died, part of why I chose to learn about medicine is I know that feeling of helplessness when a loved one is suffering from an unforgiving disease and when conventional medicine offers no solutions except to rely largely on lethal chemicals and opiates for pain.

During his illness, I remember  hoping there would be some new drug trial thinking that maybe the next unapproved drug could perform a miracle. At no time in the process do I recall anyone suggesting holistic or nutritional medicine as either a curative or preventive measure. 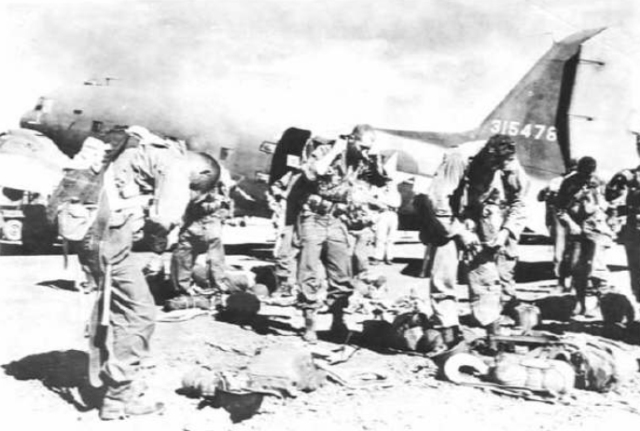 When someone passes away from cancer (or more accurately, complications as a result of the cancer), particularly pancreatic cancer, the root cause is often unknown. What we do know are that many toxins or malnutrition conditions can alter the genetic expressions of cells, in other words, disturb their normal functioning.

Furthermore, pancreatic cancer is a disease that often strikes quickly and fatally after diagnosis due to its detection typically being at a late stage. With my father and many other cases I have learned about or know personally, 2 to 3 months is a common period from diagnosis to death.

The pancreas is ‘hidden’ behind other organs and closer to the spine. One of my father’s first symptoms was severe back pain, one day it became so bad he could not drive comfortably in his truck and had to let my mom drive while he lay down. It was very unusual to see him in such pain.

In the 1970’s, he had herniated his back or was diagnosed with some kind of bone degeneration and his doctor advised him to stop running. He loved running so much, he continued to run, at first progressing gradually, and eventually he ran without any back pain. It had healed. At first, we all thought his new pain was just another back injury.

What can we do to help, before something happens? While we may not be able to determine the cause for a cancer to go malignant, we can look at abnormal conditions in the body and its surrounding environment and  then consider if there are some simple methods to help resist the formation of cancer based on those known abnormalities or exposures to high levels of toxins.

Back to the Present…

I received an idea last weekend when I attended a continuing education class on nutrition called “Fantastic Over 40: Nutritional Solutions to Healthy Aging” given by Jeanette & George Birnbach, DC. The days of the seminar (May 2/3) almost coincided exactly with the 19th year since my father passed away from pancreatic cancer on May 1st, 1996.

This idea came to mind when Ms. Birnbach presented us evidence from a scientific study about the synergetic effects of three foods: Garlic, Milk Thistle (Silymarin) and Hawthorn Fruit (Chinese “Shan Zha”).

Each of these foods have a  chelating effect for toxins. In layman’s terms, each has an ability to latch onto a toxin in your body and make it easier for your body to get rid of it. But what is special about these three together is that they are especially good in the process of excreting toxic metals out of your body.

The study tested the ability of over 30 herbs to bind to cadmium, lead and mercury. While no single herb performed the best at binding to all three, a combination of the three herbs in particular provided the best results. See chart below. 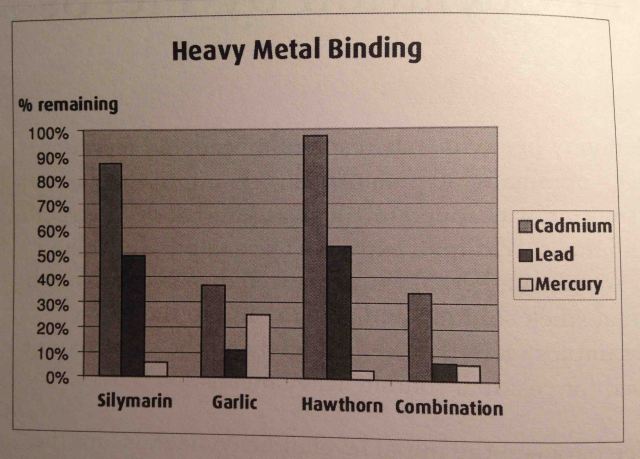 My father, when he served in combat in World War II was severely injured by a satchel charge, a bomb in a sack with a bunch of unsterile metal scrap for projectiles. His paratrooper buddies thought he was dead at first, yet they managed to carry his body away from the front line. He was fortunate to have survived and was returned to the States.

Despite the surgeon’s best efforts to remove all the shrapnel from my father’s body, there were still some that they could not remove. He was considered 50% disabled at the time of his Honorary Discharge from the Army in 1946. From 1945 until the day he died, he carried these shrapnel in his body. (To read more about my father’s combat experience, read my article here).

What if he had taken medicinal foods regularly as a simple post-operative prescription?

Having these three herbs in his diet is not only safe to take on a long term basis in moderate quantities, they would have been an inexpensive addition to his diet as a natural detoxifying agent. While these ingredients could be found in fresh or preserved form, they can also be taken in the form of organic-supplements, which are readily available, for ease of consumption.

It is difficult to convince most people to adopt preventive measures, because they will not see a change if all is successful. But you can compare a person with a healthy diet and lifestyle and compare with one who does not. In reality, we ALL have ways we can improve our health through incremental changes in our daily habits.

Here are some simple tips on how you could live a less toxic life. I composed this list with a variety of sources in mind.  Which do you need most to incorporate into your life now?

1) Permanently replace a junk food or toxic substance with something more healthy. Repeat this process on a weekly basis until your diet is straightened out. Read more articles on this blog for more tips.

2) Adults should get 6-8 hours of sleep regularly. Less than 6 can trigger inflammation and stress. More than 8 suggest other issues.

3) Moderate exercise at least 3 times per week. In general, the older we get, the less demanding we need to be for general health. Unless you are driven by a particular passion (like entering a triathlon or going to ExtremeSealExperience), what most people did at 20 just is not necessary for someone who is 60 to maintain basic health and to slow down the aging process.  Whatever you do, even if you pickup a leisure interest like social dancing, incorporate a short workout routine that utilizes all muscle groups and exercises your range of motion. Check with your doctor, do some research and see what fits your individual situation.

4) Meditation. Clearing your mind of incessant clutter is highly underestimated. Just intentionally and gently clear your mind when you are awake for a few minutes per day. No need for weird chants or cosmic robes, unless that turns you on! And NO, doing this while you are sleeping does not count! Meditation deals with another compartment of your mind than the one you use for sleeping.

5) Kindness. Make practice of being kind and expressing that kindness to others. This will help you spiritually which is an often an overlooked one-third of life. Since our physical, emotional and spiritual selves are interconnected, you will see a physical health benefit in putting your good intentions and compassion to action.

6) First thing in the morning, drink two cups of clean warm or mildly hot water. See if this works for you, it can help flush your system of toxins and help you start your day hydrated and work to keep you from being constipated (if you are constipated, work on this issue asap as having regular bowel movements are critical for proper daily self-detoxification). By the way, the general daily rule is to consume half your body weight in ounces of water daily.

Physiologically speaking, what are we trying to accomplish with a toxicity-decreasing lifestyle?

When your body must harbor a toxic substance, there is a higher probability that it will interfere with the normal functioning of cell operation. Imagine that a piece of debris gets caught in the keyhole in your car door, at some point your key will not open that door. So you open the car from the other side, but eventually that door doesn’t open. Since you’re too busy to take your car to the shop to get it fixed, you start crawling through the hatchback if your car is so equipped but then eventually that one gets jammed also.  Now you are SOL., you cannot get in the car, that cell no longer functions for you. When this happens to enough cells that perform a specific function, whether it’s generating white blood cells, producing hormones or repairing the lining of your gut, more bad happens.

Keeping up with a healthier routine will help keep those door locks free of crud and if you have specific abnormalities, you can do some reasearch to help your body stay more in balance.

The “Mopping the Floor” Analogy

You can keep on mopping the flood water off your kitchen floor, but it’s a lot easier if you unclog your sink and turn off the water first.

2 Responses to Reflections on my father and cancer